skip to main | skip to sidebar

The army has been completed for a long time and honestly I forgot about the blog for a while. Life and other hobbies have largely kept me from painting. I've learned that I really need to be in the mood to paint well and that the correct colours are key to a good looking army. Trying to substitute can turn out very poorly. For a sense of closure here is a picture of the completed army.
The full list is below and is more than one will need for a good size game. It does give you options 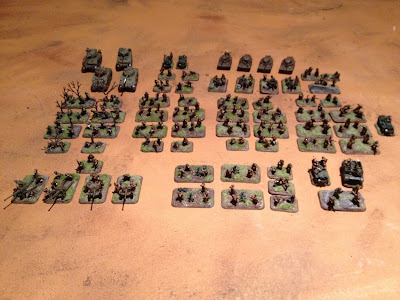 I am hoping to start posting again.  I still have the German Festungskompanie along with some support options.  The goal will be to have an opposing force for the British Airborne completed by D-Day of 2015. Mostly the blog will be used to remind me of the colours I chose or substituted and to remind me of any techniques I found useful. I've picked up new brushes and a bunch of new colours. The fieldgray colour is hard to match with GW paints and mixing really slows down the process. I also got a new desk lamp with a magnifying glass. 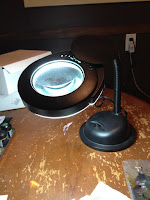 This has been quite helpful and I haven't got seasick while working with it like I have in the past. Here's hoping the Festungskompanie posts work out better than the Airborne ones did!
Posted by Karl Sciberras at 8:16 PM 2 comments:

Been AWOL for a year. Lots happened.


The good new is that I have moved much farther along in my painting. My original goal was met. I even attended a tournament which used more points/figures than I originally intended to finish. Hopefully I can get my computer back up and running in the next couple of weeks and therefore post pics and after action reports.
Posted by Karl Sciberras at 9:48 AM 2 comments:

I don't speak German, but I purchased some minis that represent those who do! My British troops need a foil and what better than the defenders of Pegasus Bridge? With this in mind I have purchased the Festungskompanie, an artillery battery, PaK 40 anti-tank guns and some StuG IV Gs. Turns out the StuG IVs were not present (I bought the wrong version!) but I can still create a decent Grenadierkompanie from what I have. I also enlisted a friend to teach me the basics of airbrushes. This was done quite quickly, with the minis to show for it!
Unfortunately, I don't have any "in-progress" pictures, I was too engrossed in what was being done. 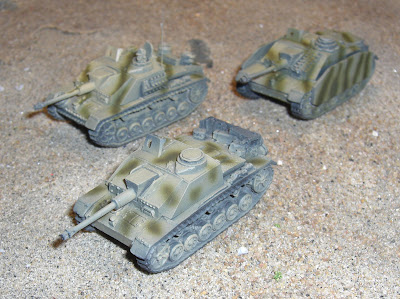 Have a look at the far tank, the commander is emerging from the hatch and my friend was kind enough to add the radio antenna as well.

The German infantry wears a uniform that is not easily reproduced by the paint colours I have so once again I must experiment. Here are the test figures: 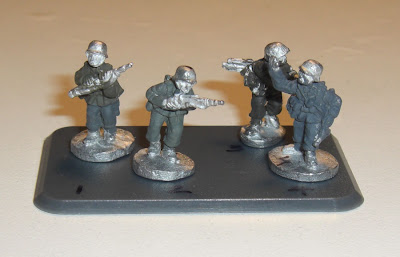 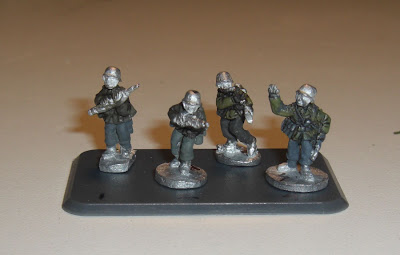 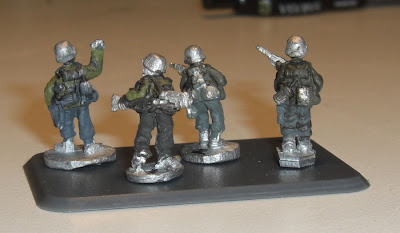 I numbered each figure so that I know what colours I used. Unfortunately I have since lost the page amongst my other gaming supplies. I'll post it once I find it.
To make my life easier I bought the Citadel Spray Gun and a can of propellent. After some testing I was able to get the darned thing to work correctly and base coated three platoons. One of the tricks I found was to submerge the can in water to keep the can from getting too cold and losing pressure. 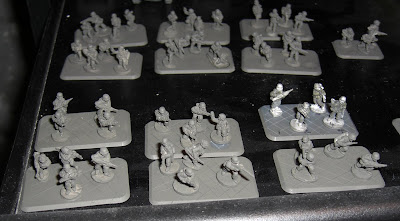 Next post I should have another battle report to present as well as even more German figures and perhaps the remaining Airlanding platoon.
Posted by Karl Sciberras at 7:12 AM 3 comments:

Taking to the Field

So did I hit my deadline? Two answers yes and no. I did play a game with fully painted miniatures on January 7th but there is still much work to do on the second platoon. I have included a "Battle Report" at the bottom of this post. A battle report is basically a play-by-play of the game. The good news is I am getting ahead in my painting, the Airlanding Armoured Recce Platoon is built and on the painting table.
Here is the second airlanding platoon.

I changed my "order of operations" when painting these teams. I added the drywall compound before finishing the figures. The reason I did this was to make cleaning up errant compound easier and to reduce the "touch up" time.

Here are the Tetrarchs, washed with soapy water and assembled in a dry run (no glue). 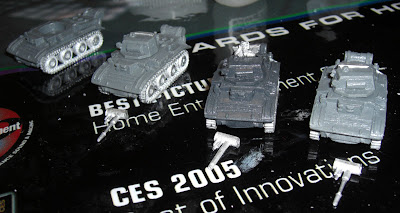 I originally was going to paint the tanks using the same method as the jeeps and universal carrier, but I just found that they were painted with a black and green camouflage scheme. Some picture research will be required. I am looking for the book "Airborne Armour" by Keith Flint, who is supposed to be the authority on these tanks.
Posted by Karl Sciberras at 8:59 AM 2 comments:

I haven't posted in quite some time. Quite a lot going in Real Life (tm) which is part of the reason for not posting. The good news is that I have quite a lot to update. I also had the privilege to go to France and see Pegasus Bridge first hand! 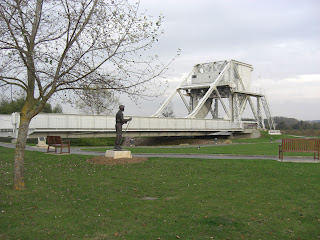 I also travelled to the Juno Beach centre and had a look at the actual uniform and gear of an airborne trooper. Turns out my colours are a bit too yellow and not enough brown. I'll keep that in mind for future platoons, but considering the speed that I paint at, and the multiple projects on the go at any given time, repainting my finished platoons is out of the question. 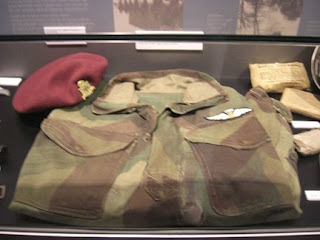 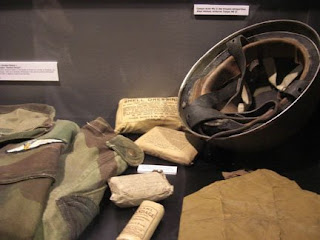 On to the miniatures! I managed to finish and base a number of platoons including the mortar team, the 6 pounders and some elements of the HQ. I followed the same steps as I used previously, laying down a layer of compound and sprinkling sand over top to break up the smooth texture of the compound. 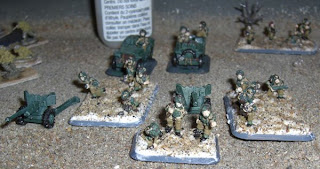 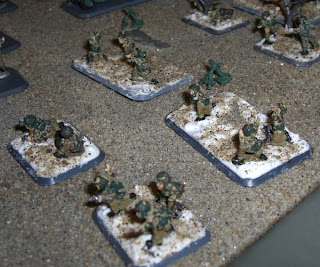 In addition to the compound, the airlanding platoon received some trees. I cut down some of these trees to keep them in scale.

I then used flock and the "special" tree glue to add grass to the bases. I don't know if it is the glue or the fact that I left the bases in the flock for some time, but the grass on these teams look much better. 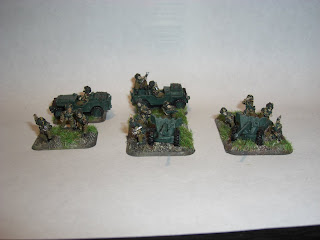 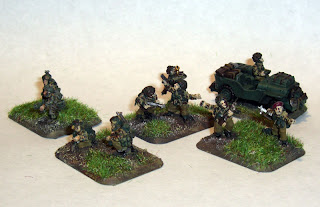 I also tried a different set of colours for painting the bases. I started with the Citadel Foundation paint "Charadon Granite" mixed 2:1 with "Vomit Brown" (I love these colour names). I then lightened the mix with a touch more "Vomit Brown" and gave the entire base a heavy drybrushing. 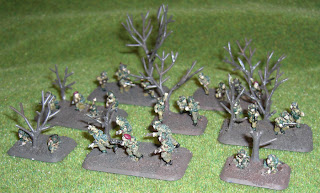 This ended up being a little to red coloured for my liking. Having lent my "Bleached Bone" to a friend I had to mix up a similar colour. I used the Citadel Colours "Putrid Green", "Skull White" and the Vallejo paint "Grey Green" to make a muddy white. I may have added the "Charadon Granite"/"Vomit Brown" mix to this as well. I then drybrushed all the bases again, adding more "Putrid Green" or "Skull White" as required. The effect can be see on the front of the 6 pounder's base.

The mortar platoon is looking a little bland. I'll try using a brown citadel wash (these paints are the "bees knees" for shading) to darken the face and clothing and give a bit more definition to the figures.

I now have about half the army finished. I am going to try and force myself to finish another airlanding platoon (or at least the engineer platoon) in the next couple of weeks and go hunting for some games. 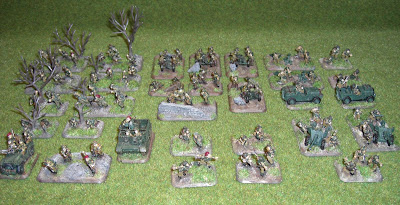 Err... well its still unpainted in the blister package. I did not get any Flames of War painting done these last two months. My efforts were focused on other minis (ORKS!) and I've been quite busy with Games Day, GenCon and a new hobby, American Revolution Reenactment (We're the "Good Guys"). See http://royalyorkers.ca/ for details on the regiment.
As for painting I intend to finish a Airlanding Mortar platoon with an observer team this month, as well as a second Airlanding platoon. I also intend to get my platoon of Tetrarch tanks onto the painting table this month.
Posted by Karl Sciberras at 5:16 AM No comments:

Still not painting as fast as I hoped. Today I bring you the painted Airlanding Anti-Tank platoon. Two jeeps, two guns and a command team make up this little platoon. Their job on the miniature battlefield is to take out enemy vehicles, particularly tanks. I still need to base these figures. I may try using sand and flock only.

I tend to paint things in groups. So the six pounders and the jeeps were painted at about the same time, though the jeeps were finished last since they require more work.

I have also made some headway on the carrying tray. Sand now covers the whole pan and it is ready for painting. 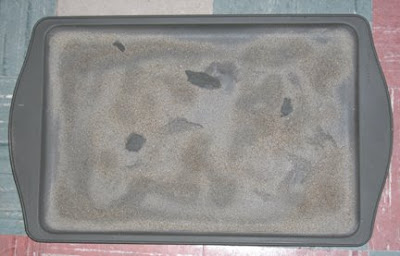 The Royal Engineers' jeep was assembled and painted this week. The boxes and other cargo were created by using unused bits from the other jeeps and some ammo tubes from the mortar teams. The idea was to make the supply jeep look like it was burdened with tools and explosives. You'll also notice that the latest miniatures are brighter than in previous posts. This is because I have skipped the "wash" step of the painting procedure. This lets me get more painted figures onto the table. I will go back over the figures when I finish painting the army and add the brown wash and any other highlights. 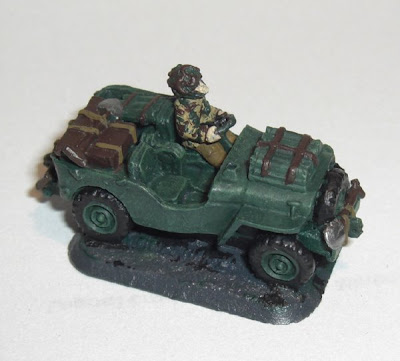 I also bought a kit to make scale trees and some "special" glue to ornament the bases of one of the Airlanding Platoons. This will help distinguish the unit on the table top (useful both for me and my opponent). I have never tried this before so it will be interesting. The idea is to add the plastic tree trunk to the base and adhere the foliage using the glue. Supposedly it is different from white glue and will stick to plastic. We'll have to see. 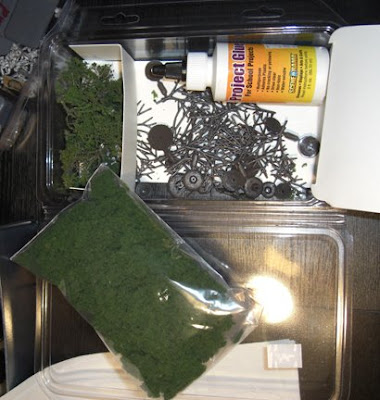 Finally, I added some green to my Headquarters platoon. One of the PIAT teams was moved to another platoon. So I only have three HQ units here. This was done strictly for my benefit during games. The fourth unit in the picture is a command team for the second Airlanding platoon.

Posted by Karl Sciberras at 11:19 AM No comments:

This blog will chronicle the painting of my "Flames of War" armies mostly for my own amusement. Later it will also include "After Action Reports", terrain and the colours I chose.